An entertaining and enthralling collection of myths, tales and traditions surrounding our trees, woodlands and forests from around the world.

From the dark, gnarled woodlands of the north, to the humid jungles of the southern lands, trees have captured humanity’s imagination for millennia. Filled with primal gods and goddesses, dryads and the fairy tales of old, the forests still beckon to us, offering sanctuary, mystery and more than a little mischievous trickery. From insatiable cannibalistic children hewn from logs, to lumberjack lore, and the spine-chilling legend of Bloody Mary, there is much to be found between the branches. Come into the trees; witches, seductive spirits and big, bad wolves await you. With this book, #FolkloreThursday aims to encourage a sense of belonging across all cultures by showing how much we all have in common.

Enthralling tales of the sea, rivers and lakes from around the globe. 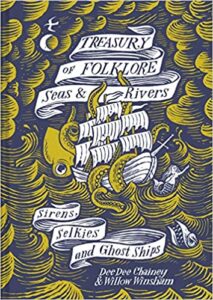 Folklore of the seas and rivers has a resonance in cultures all over the world. Watery hopes, fears and dreams are shared by all peoples where rivers flow and waves crash. This fascinating book covers English sailor superstitions and shape-shifting pink dolphins of the Amazon, Scylla and Charybdis, the many guises of Mami Wata, the tale of the Yoruba River spirit, the water horses of the Scottish lochs, the infamous mystery of the Bermuda Triangle, and much more. Accompanied by stunning woodcut illustrations, popular authors Dee Dee Chainey and Willow Winsham explore the deep history and enduring significance of water folklore the world over, from mermaids, selkies and sirens to ghostly ships and the fountains of youth. With this book, #FolkloreThursday aims to encourage a sense of belonging across all cultures by showing how much we all have in common.

A Treasury of British Folklore: Maypoles, Mandrakes and Mistletoe

Did you know, in Cumbria it was believed a person lying on a pillow stuffed with pigeon s feathers could not die? Or that green is an unlucky colour for wedding dresses? In Scotland it was thought you could ward off fairies by hanging your trousers from the foot of the bed, and in Gloucestershire you could cure warts by cutting notches in the bark of an ash tree. You've heard about King Arthur and St George, but how about the Green Man, a vegetative deity who is seen to symbolise death and rebirth? Or Black Shuck, the giant ghostly dog who was reputed to roam East Anglia? In this beautifully illustrated book, Dee Dee Chainey tells tales of mountains and rivers, pixies and fairy folk, and witches and alchemy. She explores how British culture has been shaped by the tales passed between generations, and by the land that we live on. As well as looking at the history of this subject, this book lists the places you can go to see folklore alive and well today. The Whittlesea Straw Bear Festival in Cambridgeshire or the Abbots Bromley Horn Dance in Staffordshire for example, or wassailing cider orchards in Somerset.

Writer & Co-Founder at #FolkloreThursday
About

Dee Dee Chainey is a writer, and spends her time curating weird and wonderful folklore from around the world for digital communities as co-founder of the online folklore magazine and hashtag day #FolkloreThursday, featured on 'BBC Trending', in 'The Independent' and 'Vice UK'. Dee Dee also appeared on the 'BBC World Service' talking about the value of the Cinderella fairy tale to modern women, and in 'The Telegraph', debating how folklore is still relevant today. Her first book, 'A Treasury of British Folklore: Maypoles, Mandrakes and Mistletoe', was released in April 2018 from National Trust Books (buy it here: http://amzn.to/2An2N09). Her work has appeared in the national magazine 'History of Royals', and she regularly contributes to Future Publishing's international bookazines, including pieces on folklore, Norse myths, vampires across the world, the history of magic, Bronze Age artefacts, and Ancient Egyptian deities. (See more: http://bit.ly/3a7XCzG) Dee Dee writes a monthly column for 'The Countryman' magazine — one of the oldest, most respected countryside magazines in the world — 'A Treasury of Folklore' launched in the March 2020 issue, available here: http://www.countrymanmagazine.co.uk. Dee Dee's latest books, co-authored with #FolkloreThursday's Willow Winsham, from Batsford, were published in April and August 2021. She is represented by Sprung Sultan literary and talent agency.

'A Treasury of British Folklore'

Watch my talk, ‘Journeying into the Otherworld: Death Rituals in Scotland, from the Merry to the Macabre’, from the ‘Skelling, Skeklers & Guising’ Halloween conference in Edinburgh.

Dee Dee Chainey: In the Media

2019
Talking about the value of the Cinderella fairy tale to modern women.

2018
Why we celebrate Halloween in the UK.

2017
British folklore: How the traditional tales are benefiting from modern culture

A Treasury of British Folklore

It’s a testament to the growing interest in folklore as both an area of academic study and a topic worth further investigation by the general public that the National Trust would commission a collection of folklore. Written by #FolkloreThursday‘s own Dee Dee Chainey, A Treasury of British Folklore: Maypoles, Mandrakes and Mistletoe collects lore from the length and breadth of Britain. It’s no easy task, either. Chapters are devoted to subjects like love and marriage, or death and burial. Elsewhere, we enjoy the lore of trees, tales of giants, and even ghost stories. Divided into three sections (Of the Land, Plants and Animals; Witchcraft, Magic and Heroic Tales; and The Milestones of Life), A Treasury of British Folklore acts as a primer for a huge range of sub-categories of folklore. You can learn about everything from Arthurian legends to Harvest festivals – and everything in between! Most counties show good representation from Northumberland to Cornwall. Both Wales and Scotland enjoy plenty of entries. Chainey includes a helpful ‘calendar’ at the back. This helps you discover where these celebrations and rituals actually happen around Britain throughout the year.
Icy Sedgwick
Writer & Folklore Blogger

Dee Dee Chainey is a world treasure. She is a cultural icon for those of us who adore Folklore and recognize its vital importance and impact on all aspects of our life, and the way tradition has the owner to many issues we face. The online magazine #FolkloreThursday is a wealth of knowledge of World Folklore and probably the only reason making Twitter useful. This beautiful volume, wonderfully illustrated by Joe McLaren, is a true treasure covering every ”branch” of British Folklore, the dark and supernatural, the human and earthly.
Amalia Gavea
The Opinionated Reader

I think it’s easy to forget how routed Britain in mythology, legend and folklore, Greek, Norse, and countless others surround us in literature and media. But it is Chainey’s ability to write poetically, to highlight the magic in the everyday woodland or river, that makes this book so interesting. Not only is the writing style beautiful, but it is also engrossing and aims to make you extraordinarily look at the ordinary. It is easy to see how Chainey helped build up the successful online magazine #FolkloreThursday, as her writing style is so unique and entrancing.
Ruth-Anne Walbank
Lancaster University Student Union

A Treasury of British Folklore: Maypoles, Mandrakes and Mistletoe

#FolkloreThursday’s new book Treasury of Folklore – Woodlands and Forests: Wild Gods, World Trees and Werewolves was released on August 5th 2021 from Batsford Books. Written by Willow Winsham and Dee Dee Chainey, it is illustrated by the amazing Joe McLaren!

Library of Congress Symposium: Traditional Folklore in a Digital World

Really pleased to be speaking at the Library of Congress’ American Folklife Center symposium, Traditional Folklore in a Digital World, exploring folklore in the digital environment.

We’re so excited to announce our new book, Treasury of Folklore – Seas and Rivers, from the wonderful @BatsfordBooks.

My new folklore column for #TheCountryman starts in the March issue!

Halloween Folklore for the National Trust

It was lovely to really engage with the folklore of Halloween this year. I was asked to write a blog post on it for the National Trust, which you can read here. I also spoke to them about it for their podcast, do check it out!

It was lovely to go along to Charlecote Park on September 28th to give a talk on A Treasury of British Folklore: Maypoles, Mandrakes and Mistletoe, released by National Trust Books in April 2018. (Which you can read more about on the #FolkloreThursday website.) Furthermore, it was absolutely brilliant to meet the fantastic illustrator, Joe Read more about Folklore Trail & Book Signing at Charlecote Park[…]